It never ceases to amaze me the variety of stories we can see told in films, and there is an entirely higher level of amazement when those stories are based on true events. I also love seeing actors who are masters of different realms mesh beautifully together across all expectations of what I may feel they are capable of. All of this and more is what we get with The Upside, a remake starring Kevin Hart and Bryan Cranston and based on The Intouchables, one of the most successful French films of recent years (which I must admit to not having watched myself, as of this writing). It isn’t often I laugh as much as I feel in a film, but I can say that this one did that for me.

In this movie, we follow Dell Scott (Kevin Hart), a down-on-his-luck dad who can only get his life together and see his son if he can begin to hold down a job. While half-heartedly job-seeking as required by his parole officer, he happens upon an opportunity that is completely foreign to him: serving as a caretaker for Phillip Lacasse (Bryan Cranston), an incredibly wealthy quadriplegic in need of 24-hour care. Despite the protesting of Phillip’s right-hand in running his business, Yvonne (Nicole Kidman), he offers Dell the job that he has no right having. The film follows the growth of their working relationship, and while it may not be the most surprising in the story it tells, it is touching and most definitely the funniest film I’ve watched in some time. While tone can kill a “dramedy” by not balancing the serious with the light-hearted, I thought this movie was a sterling example of such balance. 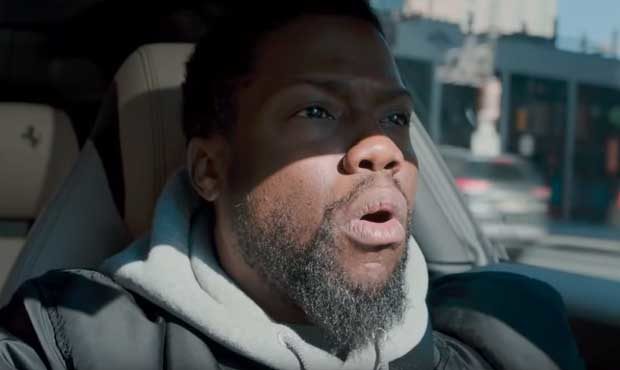 I don’t typically consult the opinions of others before writing my own review, but seeing as how I watched the film several weeks after its wide release and almost a year after its original planned release (delayed due to legal trouble for its original production company), it was quickly obvious that my opinion of the film doesn’t line up with most critics. While many criticize the film as being cliched, preachy, and even manipulative, I saw none of these things. What I saw was a film that rang true emotionally, even amidst a surprising amount of solid comedy. Truth be told, I have found most comedies in recent years to be guilty of trying too hard; with The Upside, everything just felt more real than what I’m used to seeing. I laughed hard throughout at the situational comedy and rapport between the leads, as did my wife, and to be quite honest, we were stunned at how poorly this film has been received by critics. With the emotional honesty of the script and sincere performances, I wondered if their opinion was of a different movie than what we saw.

In recent years, Kevin Hart has gone beyond his sold-out comedy venues to become a stable comedy talent in movies, but I would definitely say that The Upside is his best showcase of acting talent yet. Does he deliver rock-solid hilarity? You bet he does, but he also has a role here that allows him to play a real character with problems and a troubled past. It’s refreshing to see Hart play alongside an actor like Bryan Cranston, who I consider to be one of the greatest actors of our time. His portrayal of Phillip just shows even more sides to his talent, as it completely limits his ability to grab attention by inhibiting his movement. Regardless, I couldn’t keep my eyes off of him while he was on-screen as he does so much, even with doing very little. While Hart plays with high energy, it’s that joining together with Cranston‘s low-key performance that makes the two of them a great pair to watch. Throughout the film, I just loved watching both of them together. Nicole Kidman does a great job with the role of Yvonne, even if it doesn’t allow her moments to truly shine. Even so, she makes her role believable, and she fits right along the two stars.

I’m not that familiar with Neil Burger‘s directorial work aside from the first Divergent film, but here, he forgoes what could have just been lots of stationary camera headshots intercut between characters during the dialogue. Instead, the handheld shots gave the film an intimacy and connected me to the story being told. Usually, these techniques prove shaky and off-putting, but I didn’t feel that here. I initially felt the time-jump intro was the wrong way to begin the film, but it left just the right amount of information to keep me wondering of how we could get back to that point, as well as providing one of the few action moments in a film that is largely dialogue. That entire intro was shot with a different energy than most dramedies would be, and it made me immediately invested in the story. There are several subplots to unravel before we get back to those events, and some might find that all to be somehow meandering; I didn’t.

Content-wise, I immediately was drawn into how chance encounters can be life-changing, and my mind thought while watching how God orchestrates great things out of the little unpredictable moments in our lives. He truly works in mysterious ways, and while this film doesn’t bring up matters of faith, its themes of trust, companionship, family, grace, and caring for others personally evoked core tenets of faith to me while watching. Undoubtedly, this is a Kevin Hart comedy that was rated R in its original cut. Thankfully, it’s been made into a PG-13 film, which gives its message a broader audience. Still, expect language and sexual humor within. Also, marijuana features throughout, but with medical marijuana now a political issue in U.S. politics, it’s interesting to see it play out in a film where it doesn’t feel out of place to the narrative. It’s not a movie for kids, but that should be obvious just from the trailers. This is due more to it being a character piece than being somehow inappropriate. These things aside, I was touched by how the film refreshingly shows that relationships, friendships, and opportunities can simply arise from going outside our initial hesitations to giving someone a shot, whether it works out or not.

All-in-all, I had an incredible time with The Upside. The laughs were in far more abundance than I anticipated, and all of that fun came alongside a story that moved me with honest performances. I fully recommend watching it, as it really has something for most any adult moviegoer. Don’t believe the largely-negative critical response. As the name seems to imply, The Upside is uplifting and just an overall great time.

To purchase this film, visit the Amazon Affiliate Link below: