Last month, I was severely disappointed with the meeting of two comic-book titans on the screen. Batman v. Superman shot big, but missed.  With film trailers pointing to a rich philosophical divide between Bruce & Clark, culminating in what could have been the Battle Royale of all things geekdom, instead, the film was a mess, one failing at the heavy task of “world-building” multiple franchises for Warner Bros. while trying to build a coherent narrative, worthy of the timeless heroes.  I don’t want to make this review a comparison piece, because I’m sure you’ll find many of those on the internet, formally written as articles or scribbled on random comment threads.  However, this instinct to bring up BvS is no accident, nor is it unfair to draw a comparison, as at one time, both films were set to open the same day.  I’m glad they didn’t, because the space of time between their releases has given me time to realize all the things that could have gone wrong with Captain America: Civil War, and I’m glad to say that it looks like it escaped such things. WOW! What a fantastic film!

Overall, the two movies deal with similar themes: a philosophical impasse between two heroes, each being manipulated by circumstances, agendas, and gut-feelings.  It’s potentially powerful material, and with the vast histories of the DC & Marvel universes, even though both films were almost explicitly marketed as “adaptations” of popular story arcs (DC Comics‘ The Dark Knight Returns & Marvel‘s Civil War), each film plotted its own course.  I believe it was the wisest course for both.  Still, as I alluded too, ‘BvS’ crumbled under too many plotlines, unconventional takes on long-established characters, and the burden of establishing so many new films stemming from it.  Civil War does not.

I should say this early on: Civil War is not Avengers 2.5, but it is.  At the heart of this film, we find Cap & Bucky (even though, arguably, it made a better Avengers film than Avengers: Age of Ultron).  We know his guilt over Bucky’s “death” in Captain America: The First Avenger, almost stopped him from being the hero, and guilt over what Bucky had become in Captain America: The Winter Soldier warred on him as well.  Still, in this film, we see one friend who won’t give up on another, even when all goes against them.  The war between loyalties, yes, is stretched between all the heroes featured in the film, but at the center, we see Cap choose his belief in Bucky, even over Tony Stark.  I would be remiss to say that our Golden Boy doesn’t keep his shine throughout the film.  I felt a real palpable shift in my own allegiance of who was “right” in the film, when all is known in the end.  My takeaway from it all, in the effort to avoid spoilers, is that relationships are messy, and when there is a competition for loyalties, someone will lose out, even (and especially when) we do our best to not hurt them, and it will have a rippling effect throughout our lives. 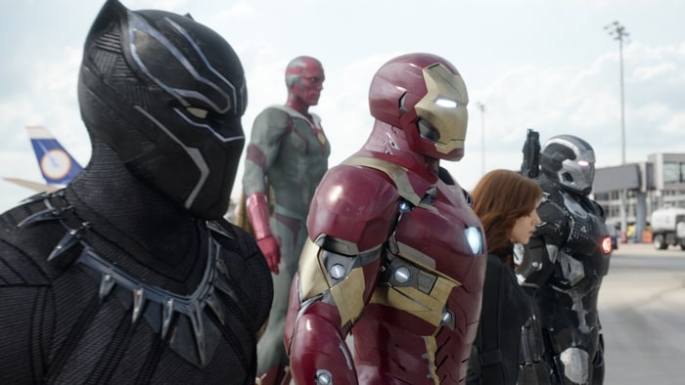 Just like Avengers: Age of Ultron, we get another jet-setting adventure.  I lost count of how many times a city or country was plastered across the screen, signalling a transition in location, but we go all over here.  Still, I didn’t ever feel lost.  The plot moved along at a pace that never slogged, and even after a 147-minute runtime, I wasn’t looking for it to end.  Crowd-pleasing isn’t always said as a compliment in all circles, but here, I can share that the theater I was in cheered, laughed, and awed throughout.  There are some great surprises for general audiences within this film, but nothing that comic-buff couldn’t see coming.

While I could go into a lengthy dissection of all characters and their loyalties, I’ll try to be brief in what needs to be said.  Someone who won’t get mentioned much in many reviews, but who brought the goods was William Hurt, returning as Thaddeus Ross, now Secretary of State.  Seeing him without the Hulk and nary much mention of him at all was a little strange, but I’ve always respected Hurt as an actor, and he didn’t disappoint here, acting as the face of the catalyst for dealing with the heroes’ recurring collateral damage through the Sokovia Accords, a global response initiative aimed at keeping the heroes on call and in check by the world governments.  This legislation is brought about alongside news of a terrorist incident implicating Bucky Barnes, also known as the former Soviet assassin, The Winter Soldier. All of this together unsettles Captain America and stirs him to resist, and several fall in line behind him for various reasons. Through the preceding Marvel films, we have seen these heroes witness a corrupted S.H.I.E.L.D. organization, and they feel reason to defy the directives, if on nothing else but the idea of precedence alone.  On the other side, we see Iron Man, who feels guilt for the damage he and others have caused.  Falling in line among others behind him, we have two new heroes: Black Panther & Spider-Man.  Black Panther, played by Chadwick Boseman, was probably my favorite aspect of the film: his power, presence, and sense of duty were incredible.  From his story arc, we get a powerful lesson on seeking justice before vengeance, merciful in ways but just as resolute.  Retaliation can often bring other hurts into our own lives, and seeing his story spoke the most powerful lesson in the film to me. Spider-Man, on the other hand, was just pure glee.  He’s absolutely incredible to see alongside all the others we’ve known in the Marvel Cinematic Universe, and his adolescent nature, brought out wonderfully by Tom Holland, made him feel unique, as he played with the adults.  I can’t wait to see more from both characters moving forward.

Civil War never felt beholden to “world building” of establishing the many films that will be following; however, it did feel richly constructed upon the many films made prior, which is more than great.  One could argue that much of the movie-going public is spending time engrossed in multi-season storylines via streaming on Netflix and Amazon Prime, so relying upon what came before isn’t the problem it could have been in years past with other properties.  Don’t expect hand-holding as an audience here.  You’ll go from scenes featuring a multi-colored, floating android to a man who can change his size at will.  It’s now expected you saw all the films that preceded, and if you did, I believe you’ll be witnessing something special in the entertainment landscape: serialized blockbusters, where characters can drop in and out of narratives with little thought against it by the audience.  I’m excited for all that is possible now in the Marvel Cinematic Universe, and this film just proves the quality hasn’t quit yet. 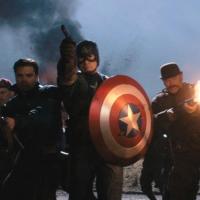