In my re-watch of the Marvel Cinematic Universe, I almost skipped 2011’s Thor. Don’t get me wrong; this wasn’t because I dislike the film. Not at all; as you’ll read, I enjoyed it, and I have for years. In my lead-up to Thor: Ragnarok, I watched the original film and Thor: The Dark World to prepare. As my review shows for Ragnarok, it didn’t do me much good for preparation, as that movie was a unique ride and reworking of the Norse god and all of his accompanying characters and locales. So, while it didn’t do much to get me ready for that, I was reminded of how well done his original film introduction turned out. 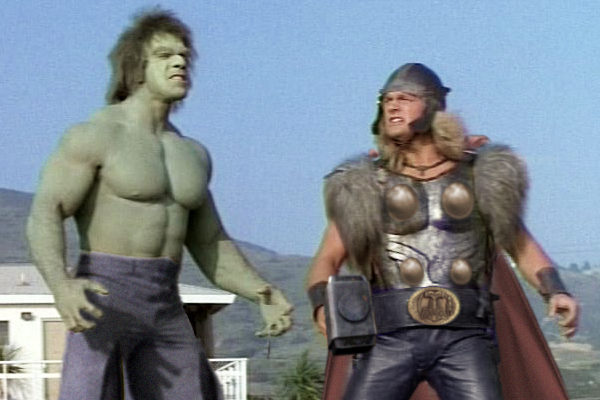 Thor, unlike many other Marvel characters, wasn’t often adapted for television or animation in years’ past. The sole live-action representation I remember growing up was from the TV movie, The Incredible Hulk Returns, where he was played by Eric Allan Kramer (pictured above with Lou Ferrigno as Hulk). I watched that movie many times, and it was one of the primary ways I familiarized myself with the character. I just never was a big fan of his comics, and my heavy love of mythology steered more towards the Greeks and Egyptians. When it was announced that Thor would follow films centered on Iron Man & The Incredible Hulk, I have to admit that I wasn’t as excited as some. Once I saw trailers and such in 2011, I got on board.

Thor, of course as history shows us, is the Norse god of Thunder. Stan Lee has been around for many a decade, but believe it or not, this was one Marvel character he didn’t invent. It’s safer to say he “re-invented” Thor, utilizing ancient myths and making a comic-book series out of it all. Thor and all of the Norse gods of Asgard weren’t just dusty old legends in storybooks here; in fact, Thor was brought into our world (Midgard, if you will) by Odin as the person of Dr. Donald Blake to learn the plights and triumphs of humanity. It was a brilliant way to make a god relatable and to give him a secret identity, as heroes in comics are prone to having. As he grew more understanding and attached to Earth, Thor became a champion of its people. In fact, he was a founding member of The Avengers, and of course, in this film, made his introduction, even before Captain America.

In this film, Thor, played with incredible charisma from moment one by then-unknown Chris Hemsworth, is being prepped to succeed his father, Odin (the always superb Sir Anthony Hopkins). As this and later films show, Hemsworth was born to play this role, even if they died his eyebrows blonde, here and only here. Funny enough, his brother, Loki, is played by Tom Hiddleston, who is just as well-cast with a role that proves even more important in later films; Hiddleston tested for the part of Thor, as shown here, but thankfully, he was kept on for Loki. These three grant so much to this film and the entire plot hinges on their relationships with each other. That comes at the expense of other Asgardians, like Frigga (Rene Russo), Heimdall (Idris Elba), Sif (Jaimie Alexander) and Hogun, Fandral, & Volstagg (Tadanobu Asano, Josh Dallas, & Ray Stevenson, respectively) who don’t get that much substantial screentime, but on the same thought, it also doesn’t prove distracting following multiple plotlines. Without delving too much into the plot, Thor is banished to Earth because of his actions, stripped of his power, and found by scientist, Jane Foster (Natalie Portman) and her colleagues (Stellan Skarsgard & Kat Dennings). S.H.I.E.L.D. investigates his crash to Earth, leaving Thor struggling to reclaim his place and return to his home.

The film doesn’t get into secret identities or the like; it all functions primarily as a “fish-out-of-water” story, and honestly, it all works as a film. Comedy naturally comes from such things, and the comedy, while never on overload, mostly works (and helps) here. The aforementioned Donald Blake persona from the comics is merely used as an alias for laughs, the name of Jane’s ex-boyfriend to help Thor lay low. With that identity being so important to the original comics, it is quickly apparent that the film takes some liberties with the source material, and honestly, it had to. Everything about a Norse god in modern times and the collision of science with myth made the whole thing a hard sell on paper, so the film goes straight for trying to make the unbelievable believable. That is one of the film’s greatest strengths: effective world-building that allows audiences to suspend disbelief and invest in the story of a pretty unlikable character who we grow to understand and root for. While I wasn’t a fan of Thor coming into the series, my liking of the character all begins here with a solid foundation.

Viewing this debut within the chronological lineup of films, you realize how incredibly risky this film was for Marvel Studios. Had this film not worked on any level, it could have conceivably derailed the whole machine that was leading to The Avengers and beyond. Still, this movie does work; it isn’t perfect or even one of the strongest films, but there is a uniqueness here, a natural part of the hero amplified even more so by the director, Kenneth Branagh, and his vision. While very familiar with his acting work over the years, I was less familiar in years’ past with his skills behind the camera. I’ve watched some of Branagh‘s directed films, especially ones of recent years, but reading of his Shakespearean background and his filmography, he was a perfect pick, while still unconventional, to ground this character, while simultaneously conveying the majesty of Asgard and its court. All of Branagh‘s qualifications make their way into this film and show on the screen. My favorite aspect of it all was his choice to utilize “dutch angles” throughout the film. Many of the shots in the film are tilted, and not only does this mimic the look of many comic-book panels, it also gives everything an off-center approach as we witness the legends of old collide with the modern-day. Some criticized it for overuse, but it gives this film a unique visual identity in the MCU (as shown below).

Camerawork is part of it all, but special effects are contingent to making something of this nature. All-in-all, they mostly work here. There is a certain level of fakeness that comes through the heavy use of green-screen, and while it would be a massive expense to attempt set-building for the entire film, there are places where it might have yielded a more believable look, overall. Shots are meant to be expansive, but the nature of green-screen keeps the feeling smaller than they need to be or just not quite right on some level. It isn’t just backgrounds though; judging it in line of Iron Man and The Incredible Hulk, I would say that the special effects in Iron Man have aged much better than what we see here, with creatures battled in this film coming across more “plastic-like” like the Hulk appears in his solo film. It doesn’t break the film, but to be honest, it does hold it back on a certain level. If anything, it shows that while Marvel movies have incredible budgets now, the early films had to more with less as they proved themselves to audiences.

Where the film falls from favor is in how there isn’t a momentum here like many of the other films seem to have. It’s been called a bore, which I feel on a certain level is unfair, but I get that. Nailing the grandiose and mythic nature of it all may on some level create an unavoidable distance between the film and audience. That may not be experienced by all; still, while I have watched this film many times, I myself have always done so with some level of distance. I love the actors, the look and feel, and the shots, but I was never on the edge of my seat in any viewing I’ve had, even in the theater. It’s amazing to see something that could have been ridiculous on almost every level be a coherent story with gravitas galore, but I’ve never gotten bowled over by it all. By the screenplay, the film is a mixed bag on the written page: half regal drama and the other half almost a romantic-comedy, all built on the the back of a sci-fi/fantasy film. Making all that work on any level is an accomplishment to be proud of, but it must be acknowledged that it feels like a slower film than super-hero epics tend to be. The comedy mostly works here, even when the romance feels forced.

Content-wise, we’re talking about a film featuring a god (little ‘g’) as the hero. That is bound to rub some Christians the wrong way, but I think there is nothing wrong here. If anything, watching this film and those to follow allows people to discuss with their family and friends how the powerful in many cultures were and are deified (a point made by the film actually). Seeing the character journeys here brings out traits like humility, compassion, love, jealousy, and the thirst for power that are great to discuss later. With regards to language and sexual content, this film was much more appropriate in these things than the three preceding MCU films. There are some words to said, but the sexual content (other than two characters kissing) is not there. Blood and violence is pretty sparingly used here, so all-in-all, it’s a fairly family appropriate film by most standards, especially compared to some other MCU films.

In closing, while it isn’t my favorite film of them all, I have to say that I revisit this film every so often, just in amazement that it all works on any level at all. There is something here for almost everyone; it may not be enough in the end to wow them, but it is entertaining on many levels. Sure, the special effects could have aged better, but it’s what was filmed on-set through the acting and staging that provides the film its lasting power. Ultimately, the self-serious aspects established here are turned on their head down the line, but in establishing the lovable, naive Asgardian power-hitter, it makes an effective debut that is worth a re-watch during a MCU marathon or even on its own. Just as Thor had to prove he was worthy, Branagh‘s film did as well.